Stories of men. Renowned for his striking works featuring male dancers, Sylvain Émard plunges seven dancers into the hurly-burly of a contemporary world undergoing massive change. Driven by doubt and a lust for life, they are searching for their place, sketching the contours of multiple identities. Carried away by their instincts and the power of the group, their only language is subtle, energetic movement, the music of bodies electrified by a shared feeling of urgency. In this poignant ritual of resistance and adaptation to the passing of time, dance seems to be the best means of coming to terms with the world and of being transformed, the better to blend in. This vibrant piece conveys all the complexity and beauty of men coming to grips with the world they inhabit. 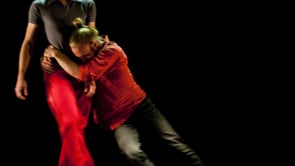 "[...] a brilliant and engaging hour of provocative and compelling dance that, like its title, re-assures the viewer over and over again, with compellingly gendered prowess, that this is not the end of the world." Bateman reviews, Toronto, Canada, February 2015

"[...] this wonderful piece is far from ordinary and grabs you in the style we’ve come to expect from Sylvain Émard, but never tire of." Dance Profiler, Montreal, Canada, January 2015

"An ethereal piece, anchored in emotion, for seven male dancers trying to survive, together, the end of their own little world." La Presse, Montreal, Canada, January 2015

"A sweet fury inhabits these bodies, bodies that at times give in to moments of abandon while at other times resisting each other and an ever-present hidden threat […] men who doubt, who struggle and who are capable of exposing their sensitivity without wallowing in it." Le Devoir, Montreal, Canada, January 2015