First part of the Climatology of bodies trilogy.

With Pluie (2004), Sylvain Émard takes an exceptional look at relations between human beings. Through an existing relationship between a man and a woman, he takes his inspiration from climate as a metaphor for the external elements affecting our daily lives. Our bodies, often without our knowledge, indiscriminately absorb a whole range of signals from many sources, near and far. More than ever, adaptation has become an integral part of life. How does the body perceive these profound transformations? This is the climatology of bodies.

Carried by the rare virtuosity of the dancers, Pluie ravishes the senses, allowing Sylvain Émard to share the extraordinary finesse of his art. 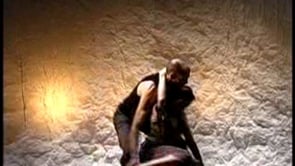 “I was also charmed by Sylvain Émard's Pluie, presented at Usine C in March. This is a complete work, with all the ingredients needed to relish that rare sense of unity among the disciplines present (dance, music, lighting and set design).” Year-end review, Voir, Montréal, Canada, December, 2004

“Whether as a member of the audience or as a critic, one is rarely confronted with a work characterized by almost perfect unity. Yet this was the case... when I found myself at a performance of Pluie [...]” Voir, Montréal, Canada, March, 2004

“[...] the work of Sylvain Émard is impeccable, finely crafted and highly polished. His keen sense of choreographic construction is astonishing. The rich and suggestive movements are a perfect reflection of the states of grace and spiritual or mental disruption that wash, one after the other, over his two protagonists.” Le Devoir, Montréal, Canada, March 2004

“If Sylvain Émard has such evident success when creating strong group pieces, he positively excels in the pas de deux [...] this time around he has given us another moving encounter with a man and a woman [...] magnificent sets  [...] sensitive lighting [...] superb electronic music [...] remarkable dancers [...] in one of the most beautiful duets ever seen [...]” Isabelle Poulin, Guide culturel, Première Chaîne, Radio-Canada, Montréal, Canada, March, 2004

“As a choreographer of private moments, Émard knows how to guide us through the intimate landscape of love and human relations, here drawing on a subtle dialogue between his two dancers (the masterful Sandra Lapierre and Marc Boivin).” La Presse, Montréal, Canada, March, 2004

“Pluie is one of the most organic works I have ever seen. Every element plays a part: set, music, lighting, movement, and the fluid expression of the performers.” Dfdanse, Montréal, Canada, March, 2004

“Let's hear it for modern dance productions! When they are good, they are absolutely amazing [...] Pluie is the type of production that one can just sink into [...] Experimental and challenging, Pluie defines itself through beauty and grace.” Orcasound, Montréal, Canada, March 2004