Last part of the Climatology of bodies trilogy.

Following the success of Pluie (2004) and Temps de chien (2005), Sylvain Émard began work on Wave, the third and final chapter of the Climatology of bodies cycle. In this highly acclaimed trilogy, Sylvain Émard uses the climate as a metaphor for external influences that affects our lives.

Wave explores our capacity and our individual desire to melt, to become part of an increasingly vast and multidimensional environment as changes in the natural world, observable on a global scale, seem to be accelerating at a furious pace. Performed by five exceptional female dancers, this tidal wave sweeps forth to reveal dance as the exquisitely tuned music of bodies. Energetic, remarkable and moving beyond words. 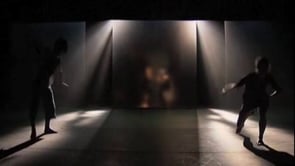 HAIR AND MAKE UP  Angelo Barsetti

“Everything about Émard's work [...] has an intensely poetic feel to it. [...] These pieces [Temps de chien and Wave] are profound excursions into how we inhabit our skins, our relationships, our environment. Plenty of choreographers set out with ground-breaking artistic ambitions: Émard has the intellect and creative ability to see his through.” The Herald, Glasgow, United Kingdom, March 23, 2009

“[...] with an incredible mastery of dance vocabulary, Sylvain Émard presents [...] a very fluid piece that is visually and musically hypnotic, entrancing and captivating. [...] the five dancers perform with strength, conviction, magnetism and incredible sensuality, magnified by the geometric precision of gestures and movements that generate an energetic intensity. [...] It is an intense vision that remains with us long after leaving the theatre, pensive and suffused with sensation.”  La Presse, Montréal, Canada, September 11, 2008

“Like nymphs from the end of time, the dancers in Wave give life and form to the final segment of Sylvain Émard's trilogy the Climatology of bodies. Slipping into a universe that at times evokes an ancient sea bed, at other times a fallout shelter, they prance and romp under an extraordinary light and to the roar and rumble of a muffled wave.” Le Devoir, Montreal, Canada, September 11, 2008